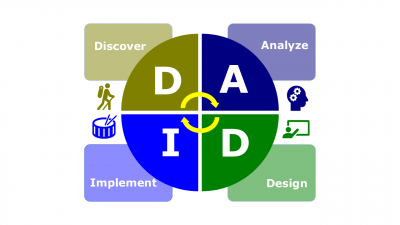 The Method is used in any development in two ways:

In education, Bracka School also deploys the Method while building the curricula on multiple sets of four quarters, each of which represents one batch of the Method.

The first batch of the Method is Enterprise discovery. It includes all activities resulted in discovery of any data relevant to the further enterprise development. These data include some statement of the business need that is sought to be satisfied as the key outcome from that enterprise as a whole.

The second batch of the Method is enterprise research. It includes all activities needed to process the data discovered in enterprise discovery in order to provide enterprise envisioning with detailed requirements for the future outcome from the Method.

The third batch of the Method is enterprise envisioning. It includes all activities needed to conceptualize, design, scratch, model, map, plan, project, and/or detail the Method's outcome and/or finalize the architecture or layout for this outcome.

The fourth batch of the Method is enterprise planning. It includes all activities needed to create and deliver the Method's outcome based on its architecture or layout made in enterprise envisioning.

Classifications of the Patterns are tentative. Every Method has some agility and no Method can fully fall in one exact category. Thus, the taxonomies below serve to demonstrate various directions of various Patterns rather than precise classifications.

With one exception of discovering a business need, which project deliverables shall satisfy, the complex Method can serve as a project management canvas itself. One or more the basic Patterns can be used in order to create or modify any output of any project management process such as a project charter, stakeholder register, acceptance criteria, etc.

Complex Patterns vs other development concepts

Although the table below is not intended to be complete, it addresses some tendencies and correlations between the complete complex terminal Patterns, on the one hand, and some other other development concepts, on the other hand:

Bracka School has built its Septem Artes Administrativi curriculum on seven sets of four quarters. Each set is called quadrivium and designed around the Method.